On ALL THE CHANGE and the Loneliness of Self-Care 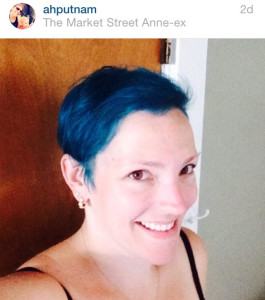 I’ve been going through a lot of big changes lately, and while almost all of them have been good in the long term, the short term has been one long ball of stress and exhaustion and emotional turmoil. The above photo shows two of the changes: the blue hair is a small thing, a change I’ve been wanting to make for ages but which was surprisingly difficult to realize, and the green wall behind the blue hair is one of the few walls in my new apartment. That change was much more difficult emotionally, despite being surprisingly easy logistically, and being a knock-on effect of another great and giant, if super stressful, shift: after years of talking about becoming a teacher I will finally be one, starting in August. I’m panicking about doing a good job but that just means I really care, and I’m excited about that.

The biggest change, of course, which I suspect is the underlying cause of all the others, is in me. I’ve been through nearly two years of therapy now, spurred by the splintering of my life as I knew it, and in the process I’ve rebuilt myself in a similar image, but with a much stronger foundation. I’ve learned what my strictest boundaries are, and how to implement them, and I’ve gained a lot of calm self-respect (which feels very different from the defiant self-preservation through which I masqueraded as confident). The thing is, while I’m happy with this change, not everyone in my life has been as comfortable with it – the new boundaries and expectations, as not-that-high as I think they are, have been difficult for some people to understand and adapt to, and that has caused some pretty major pain on both sides. The new apartment, lovely and private though it is, is one of the visible effects of that pain; in the past six months communication has broken down so badly between my roommate/best friend of fifteen years and me that I was eventually forced to move out as an act of self-preservation. The whole thing has been devastating, which is all I will say on the matter because the details aren’t important and her privacy is.

What is important is that I learned something: self-care can be shockingly lonely. Learning to depend on yourself is essential, but nobody wants to have to do it. I had to do it when my last relationship ended and I didn’t know how – it took me over a year to get to a functional stage of ability. This time, I knew how, but I was still deeply angry and saddened to be forced to do it again. And the funny thing about that forced self-reliance is that in some ways it is self-inflicted: I have a new partner, one who helps me without any need to be asked, who is there for me unconditionally, and yet I’m constantly holding his support at arm’s length because I’m terrified to need it (and risk losing it). It’s a lonely, confusing tightrope to walk but it’s much more solid than the mirage of ground below, where I used to think I was safe.

As for all these changes, I really do feel in my gut that they’re for the best. I’m going to be doing a job I’m passionate about, living in a space that’s wholly mine (besides one shelf in the bathroom cabinet which I’ve generously donated to my long-suffering boyfriend), and paving a new, more reliable path to adulthood. It’ll be a lot of work, and parts of it will be emotionally and physically trying, but I genuinely believe that every new mile I lay down will be worth the sweat and tears (and yes, sometimes blood – you should see my fingers after the past weekend’s epic move).